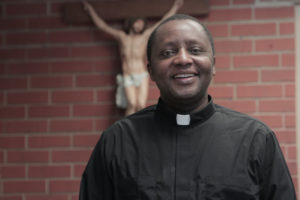 A chance meeting in Ederney, Co Fermanagh on the 6th November 2009 has blossomed slowly into the little “shrub” of our Charity, The 3A’s (Anawim Adonai Africa, A Cause for the Poor). There is still plenty of room for more growth.

The meeting took place between Fr Richard Ng’uta and Gerry Gallen at a family event. Fr Richard, from the Kitui Diocese, Kenya, at the time was on a “break” from his studies at the British Jesuits Heythrop College, University of London, where he was studying for an MA in the Psychology of Religion. Fr Richard’s visit to Ederney had been arranged by Mgr Larry Duffy, who had known him while serving in Kitui. Gerry and his wife Angela had just attended a Memorial Mass for a relative in St Joseph’s Church, Ederney . Fr Richard with the parish priest Fr Brendan Gallagher had been invited to the family home for refreshments. Fr Richard and Gerry “hit it off” as we say in N Ireland and became good friends. The plight of Kitui lacking water for the four previous years was discussed and Gerry informed Fr about Irish Charities, especially “Bothra”, an Irish Charity which supplies goats to needy areas.

And so the seed was planted! At the end of the academic year Fr Richard was recalled by his Bishop before completing his studies, which he dearly wishes to complete at a later stage. During other sporadic visits over the intervening years Gerry and Fr cemented their friendship. Fr Richard also made many other good friends in the Ederney area as did Gerry who then was inspired to establish a support group, which met for the first time on the 27th January 2015. Fr Richard, whose last visit was in 2016 has now been seconded to Peoria, Ill, USA for a period of 3 years and has arranged for a deputy to replace him during his absence.

This group, now officially known as “The 3A’s” has organised on average 3 events yearly to raise money to facilitate Fr Richard’s work in his parish. Charity status was granted on the 17th July 2017. So their fund raising activities continue and hopefully in years to come the “shrub” will grow and develop into a large tree.

The Catholic Diocese of Kitui is to the east of Kenya, covering about 19,000 sq miles. It is among the five poorest dioceses in the County. The area has both arid and semi-arid areas with a 33% reliability on rainfall. Poverty levels stand at 70% with malnutrition being reported at 52%. The main source of livelihood for the people living within this region is small scale farming of crops and livestock. With a vicious cycle of famine, most of the people find it difficult to absorb the devastation of these droughts making it an area perpetually dependent on food relief.

These are the difficult circumstances in which the 3A’s group set out to support Fr Richard’s projects in the Sacred Heart primary school, Kanyanyagi. These projects included feeding the schoolchildren, building a school kitchen and two Ablution Blocks, one for boys and one for girls, and buying sports equipment for children, etc

This support, little as it was and still is continued when Fr Richard was transferred to St Mary’s parish Miambani, which also had many problems. Miambani is a rural area, 180 kilometers from Nairobi, a 2 ½ hour journey by road. That journey differs greatly from the modern roads of the bustling city of Nairobi to the dirt tracks of this area. Composed mainly of small farms, this area is very prone to droughts. The lack of rain led to the famine of 2017 during which Fr Richard’s project was to feed the schoolchildren. The famine thankfully has now receded and the feeding programme is no longer needed. Emphasis now is on supporting the education of children at all three levels.

The long objectives are to help generate funds to provide a water borehole.